Why is the sight of a Hellraiser parody in Rick & Morty’s season 5 trailer such good news for fans of the earlier, sillier seasons of the series?

Rick & Morty fans are looking forward to the next season of the show. Finally, Rick & Morty’s first season 5 trailer confirms that the show will return to one of its earlier seasons’ staples: horror movie parodies. Rick & Morty is an Adult Swim anarchic animated series that satirizes sci-fi themes as well as sitcom traditions in the goofy, gory exploits of the titular amoral super-genius and his likable, dim-witted grandson.

Rick & Morty has evolved from a madcap, mile-a-minute sci-fi parody that parodied Jurassic Park and Fantastic Voyage in one twenty-minute (Christmas) episode into a more thoughtful, but no less crude, character comedy over the course of four seasons. Seasons 3 and 4 of Rick & Morty also attempted to deliver a more character-based style of humor, with the series’ later installments devoting more screen time to the Smith family’s internal lives, despite remaining zany and surreal.

About the fact that fans of Rick & Morty already enjoy seasons 3 and 4, the season 5 trailer guarantees the return of the show’s classic horror parodies, a detail that would please fans of the show’s lighter side. In its more anarchic and less character-focused style of comedy, Rick & Morty’s first season parodied a number of ’80s horror staples, devoting entire episodes to parodying Wes Craven’s A Nightmare On Elm Street with Scary Terry, David Cronenberg’s body horror hits, and Stephen King’s Needful Stuff. Rick & Morty’s Hellraiser parodies, which were heavily featured in the season 5 trailer, signal a return to this territory, which is good news because Rick & Morty is one of the only series violent enough to successfully parody these gory franchises but still being light-hearted enough to make the spoofs humorous rather than gratuitously grim. 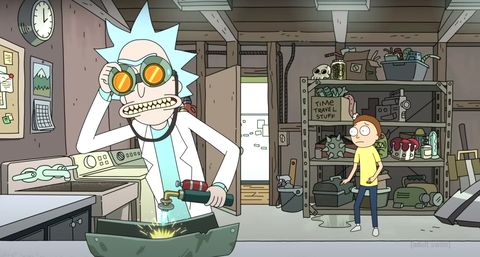 In contrast to Rick & Morty season 1, which featured regular horror parodies, the show’s second season featured less spoofs, with the remaining parodies focusing on more modern works such as the 1990s series The Langoliers and Buffy The Vampire Slayer, as well as the Purge series. Season 3’s horror parodies consisted mostly of an Attack On Titan parody, notwithstanding the fact that the series is far from horror. Season 4 contained an underappreciated Prometheus parody, but the season was mostly based on more ambitious, frequently touching stories like “The Vat of Acid Episode,” “The Old Man And The Seat,” and the season finale “Start Mort: The Rickturn of the Jedi.”

Are you looking forward to Rick and Morty’s Season 5 premiere this summer? Let us know what you think in the comments section below, or contact us directly through our social media channels for all things animated and other fun stuff!