There is a truth that everyone has to agree on is that Rick and Morty, one of the decade’s more improbable success stories, has this peculiar power. Everyone from Kanye West to its army of youthful followers has been captivated with Adult Swim’s apparently obscure program since its premiere in 2013. When its third season premiered in 2017, it was the most popular comedy among US millennials (beating out both The Big Bang Theory and Modern Family), and it has the power to make or break bands; just ask Blonde Redhead, whose song For the Damaged Coda was catapulted into the upper reaches of Billboard’s Hot Rock chart over two decades after its release due to its appearance on the show.

From that, every feature of the characters is concerned carefully including the costumes, hair, behaviour,…. Recently, I heard a group of fans discussing the hair of Rick in the movie, and that’s why this article was born. That’s all a personal idea, just read it for fun!

I’ve lately started researching the MCR1 and OCA2 genes, as well as how pigmentation genetics may be manipulated scientifically. 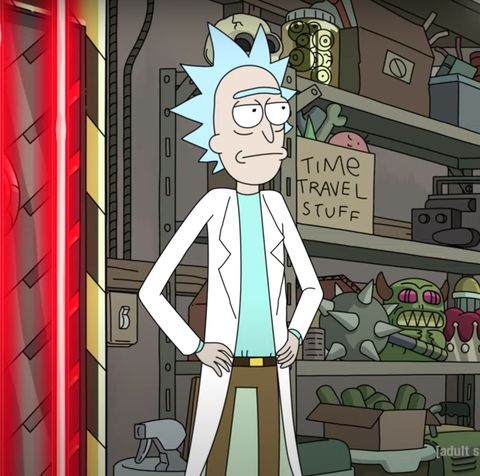 If Rick’s father was born with BB brown, his experiments with melanin – especially, the qualities of pheomelanin and neuromelanin – must have included some unknown, maybe extraterrestrial substance(s) that created a weird chemical reaction that changed the melanin pigmentation from brown to dark blue. Rick’s father, dissatisfied with the color’s darkness, altered the OCA2 gene and tampered with albinism DNA to obtain his findings, which may have also contributed to the extremely light blue that arose from the experiment, rather than the original, deeper blue. It would also explain why Rick is paler than the majority of people.

Rick’s father’s BB dominant brown allele was biochemically altered into BB dominant blue owing to the artificial genetic modification of the MCR1 and OCA2 genes with an unknown, unexpected fatal chemical compound/ alien manufactured material when Rick’s father was attempting to harness the power of colors in genes; he just made the mistake of utilizing his own. Rick’s mother was Bb (dominant blonde, recessive red), thus he was (dominant blue, dominant blue), demonstrating that this gene was superior to all other alleles for hair tone and did not behave like the majority of other hair gene alleles.

Leonard was a dominant brown recessive blonde with a Bb hair type.)

Joyce’s hair is bb red ( she dyes it blonde)

Jerry is a Bb dominant brown with a red recessive.

Beth is a dominant Bb blonde with a recessive blue color.

Summer has a strong strawberry blonde color with a recessive blue color.

Morty has a strong brown color with a recessive blue color.

The recessive blue might arise after two generations if Summer or Morty had a kid with a BB.